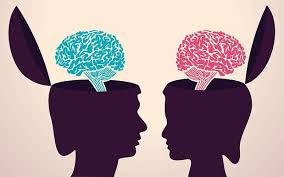 The age-old argument about whether biological sex has any influence on a person’s psychology, perception of the world and behavioral patterns is pretty much alive today, and on a completely different level than before. Recent studies suggest that there are significant connectivity differences between male and female brains – the brains of men tend to have stronger front-to-end connectivity, while the brains of women are more predisposed to be better connected from left to right.

This structural difference brings about the difference in functionality: stronger connections between the cortex and rear brain regions suggest better synergy between perception and action. In turn, stronger interhemispheric connectivity present in female brains leads to better emotional processing and ability to perceive others’ intentions in interpersonal interactions. It doesn’t mean that one or another gender is completely devoid of some kind of connectivity, it simply means that one type of connectivity is stronger than the other based on gender.

Stronger front-to-back connectivity means stronger relations between parts of the brain that perceive the outside world and those that interpret these perceptions and control the body’s actions. As a result, men are supposed to be better at learning new skills and performing complex physical activities. At the same time, better connection between brain hemispheres characteristic of female brains suggests better balance between intuitive and logical thinking.

However, as soon as these findings were made back in 2013, an alternative point of view emerged, suggesting that these connectivity differences are to be explained not by the brain sex, but by the brain size. Male brains are, on average, larger than female brains, and in such a complex organ the difference in sizes cannot be overlooked. A larger brain has higher energy demands and has to develop different solutions to minimize connection times.

However, there is other evidence suggesting considerable differences between male and female perceptions of the world. For example, a recent study by Israeli researchers shows that male and female brains start to show distinct features at just 26 weeks of pregnancy – the corpus callosum (the bridge connecting the hemispheres) is thicker in female fetuses.

This difference seems to remain at older ages as well, influencing, among other things, the brain’s perception of language. A recent study mapping the blood flow in brain when subjects were listening to a novel showed that in males, only the left hemisphere was activated during this process, while in female subject brains were activated in their entirety – which may explain generally higher language skills and general reliance on language and verbal communication among women.

However, when it comes to spatial skills and relating activities, like navigating, men generally perform better, because when solving such problems male brains normally use the left hippocampus, the area of the brain that automatically codes where you are in space – while in female brains this area usually remains inactive during navigating.

In other words, yes, male and female brains are different; their perception of the world is notably different in many respects – yet fascinatingly complement to each other.