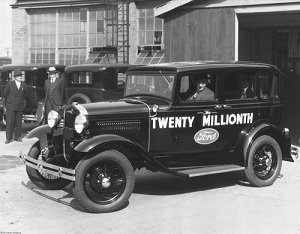 Consumer culture (also known as consumerism, media culture or mass culture) is a culture that developed mainly over the course of the 20th century in Western capitalist countries, with a great deal of influence on the part of mass media. As can be seen from its name, it is mainly concerned with the consumption of goods and services in ever-increasing amounts.

Nowadays consumer culture is a very popular target – take any problem of the modern world, and you are sure to find numerous statements blaming nothing else but consumerism for it. Consumerism is seemingly responsible for everything from world hunger to the lower feeling of well-being among teenagers.

And yet, those who badmouth consumerism don’t seem to ask themselves a couple of simple questions: what’s the alternative? How does one achieve the world that supports the same standard of living as consumer society without it being consumerist?

If you take a look at the modern world, you will see that there are plenty of societies that don’t place consumption of goods and services at the forefront of their priorities. In all of them this situation is formed by forceful imposition of this state of affairs on the part of government – and as societies, they inevitably fail for one simple reason: they are simply and plainly inefficient. Absolute majority of people declaring their hate for consumer culture are usually less than enthusiastic about the idea of moving to a society that already shuns consumerism – they desire (or think they do) to alter the society they already live in. For some reason, they believe that their current standard of living is going to remain the same.

Of course, consumerism led to extreme is a bad thing for the one who practices it – too much of anything is always a poison. Consumerism, however, has one considerable advantage over its supposed alternatives – it actually works. Modern civilization, technological progress, healthcare, easily available commodities of all kinds – all this was made possible mainly due to consumerist worldview. To say that human existence isn’t limited to consumption and satisfaction of one’s base needs is an exercise in futility. Of course it isn’t.

But let’s be honest – we live in a material world, and satisfying one’s material needs comes before we can think about higher things. The fact that so many people don’t seem to bother about higher things at all isn’t the result of some dark conspiracy that aims to divert people from their true selves. It is simply because they are not interested.