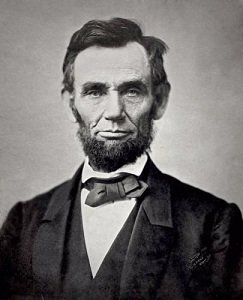 Abraham Lincoln, the 16th President of the United States of America, can be called the most well-known, the most revered and the most important figure in American history, probably tying for this title with George Washington and Franklin Delano Roosevelt. His story of humble beginning and the subsequent rise to the highest office in the land is the epitome of American Dream, and the influence he had on the fates of America and the world in general can hardly be overestimated.

Born in a Kentucky log cabin into a poor pioneer family, Lincoln went through all the stages of becoming literally a self-made man. He received a sketchy schooling from several itinerant teachers and used it as a basis to teach himself, reading everything he could lay his hands onto and desperately looking for a way to a higher station in life.

On reaching adulthood, he struck out on his own, earning his living by hard manual labor, all the while continuing teaching himself. This allowed him to secure a position of a shopkeeper, postmaster and, eventually a general store owner. Later on, he decided to pursue a legal and political career that would eventually lead him to Presidency.

Lincoln formed his position on slavery relatively early on in his career – and the fact that he spent most of his earlier years in slave-free states certainly played its role. He considered slavery wrong not so much on moral and ethical grounds, but because it was detrimental for the economic development and growth of the country, inevitably leading to stagnation and social tension in future.

Eventually slavery became the issue that allowed Lincoln enter large-scale national politics. He criticized the then-President Buchanan and the Supreme Court for promoting and protecting slavery and challenged the sitting Senator Stephen Douglas for his seat, taking part in a number of debates on the matter. Eventually Lincoln wasn’t elected, but the whole situation gave him enough exposure to become a figure known nationwide.

Lincoln was certainly an exceptional figure both in terms of  his tenacity and unwillingness to give up in the face of failure, and in terms of his leadership. He had virtually nothing when he started out on his way in life and yet he managed to become President, overcoming much better-known opponents who had support of powerful political cliques and their family names behind them.

After becoming President, he held no grudge against his political opponents, making many of them members of his own Cabinet and fully utilizing their exceptional talents. He managed to keep the Union alive during its hardest hour, thus signifying a turning point in the American and world history. Despite constant defeats and setbacks accompanying the Union army during the first year and a half of the Civil War, he never lost hope and his trademark tenacity, finally emerging victorious in the conflict.

His assassination soon after the end of the war was probably another turning point associated with his name. Had he lived longer, who knows what course the USA would have taken under Lincoln’s guidance?